Return to view your modules.

When to Get Help

Go to the nearest emergency department, or have someone call 911 if you:

These are signs that varices may have begun to bleed. 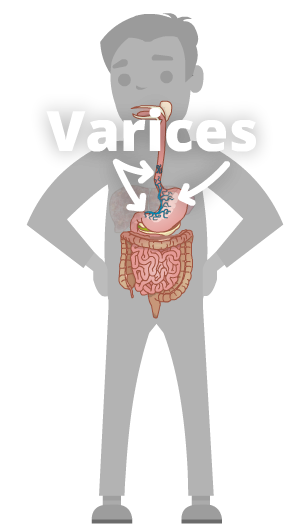 When pressure in the portal vein gets too high, it can cause pressure to rise in other blood vessels. This can make the veins in your esophagus (food pipe), and stomach swell. These swollen veins are called varices. In some cases, these veins can get so swollen that they burst. This causes bleeding inside your esophagus and stomach, which is dangerous.

The problem with varices, is that they don’t cause symptoms until they burst open and bleed. Many people have varices and don’t know that they do. Sometimes they’re found during an upper endoscopy (also known as gastroscopy).

The more severe the liver damage and the larger the varices, the greater risk you have for bleeding varices. Bleeding varices can be a life-threatening emergency. After varices have bled once, there’s a high risk of bleeding again.

Your healthcare team will look at the results of your blood and other tests to determine your risk of having varices. If you are at higher risk, your healthcare team may want you to have a procedure called an upper endoscopy (gastroscopy). An upper endoscopy involves inserting a tiny camera through your mouth to look down into your esophagus and into your stomach. If you have varices, they can be tied off with tiny rubber bands during the procedure (called banding).

Your healthcare team may also prescribe blood pressure medicine called nonselective beta-blockers to help lower the risk of bleeding from varices. If you take this medicine, you’ll need to check your blood pressure and pulse regularly. If you feel dizzy, lightheaded, or fall, let your doctor or nurse know.

TIPS (a shunt used to decrease pressure in the portal vein)

In more severe cases, an TIPS procedure may be required to stop or prevent future bleeding. This is a procedure done by an interventional radiologist in a specialized hospital.

For more information on these treatments, please click the links below:

If you take blood pressure medicine:

Let your healthcare provider know if:

The information on this page was adapted (with permission) from the references below, by the Cirrhosis Care Alberta project team (physicians, nurse practitioners, registered nurses, registered dietitians, physiotherapists, pharmacists, and patient advisors).